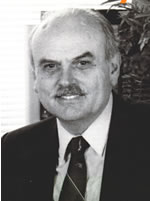 He was the creator of the Relational Model, the foundation for relational database systems and he was internationally renowned authority on OLAP (on-line analytical processing). Dr. Codd joined IBM in 1949 as a programming mathematician for the Selective Sequence Electronic Calculator.During the 1950s he participated in developing several important IBM products. Beginning 1968, Dr. Codd turned his attention to the management of large commercial databases and developed the Relational Model as a foundation. Dr. Codd developed RM/T, RM/V2, two extensive versions of the Relational Model, he defined DELTA an abstract model for business specification and management. Dr. Codd received his M.A. in Mathematics from Oxford University and his M.S. and Ph.D. in Communication Sciences from the University of Michigan.He was an elected member of the National Academy of Engineering, a Fellow of the British Computer Society, as well as a long-time member of the Association of Computing Machinery, Phi Beta Kappa, and Sigma Xi. In 1976 Dr. Codd became an IBM Fellow, and in 1981 he received the ACM Turing Award. Dr. Codd is member of the American Academy of Arts & Sciences and he is ACM Fellow.